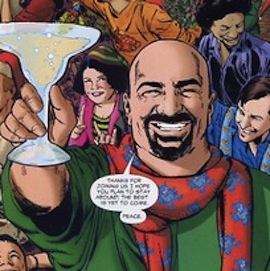 Dan DiDio (born October 13, 1959) was DC's Co-Publisher along with Jim Lee, and counterpart to Joe Quesada. Although they started off pretty much the same, as with everything involving the two companies, they eventually drifted in very different directions. While Quesada continues making or approving decisions that piss off an extremely large majority of Marvel fans, DiDio's later changes to the DCU split the fanbase pretty much evenly and he even seems to be undoing his earlier "mistakes", with a hint that this was the intended result all along... that or Geoff Johns is fixing his mistakes.

He's known for being a huge fan of The Silver Age of Comic Books and wanting the DC Universe to resemble the comics he grew up with. That's not necessarily a bad thing, as many fans and creators have a lot of affection for the Silver Age even today, mostly because of how lighthearted and silly it was. However, unlike most creators who try to recapture the spirit or tone of the Silver Age (i.e. Alan Moore’s Supreme), DiDio prefers to simply take everything back to the status quo of The '60s (breaking up marriages, removing supporting casts, replacing Legacy Characters with the originals, etc.) and playing it completely straight and serious.note Basically the Silver Age without everything that made the Silver Age fun. He’s also known for disliking any form of legacy or history in the DCU (despite that being one of DC's main appeals to fans), favouring Younger and Hipper takes on characters which have been around for over half a century in some cases. He once stated in an interview that he believes it's impossible for a Kid Sidekick to grow up and take up the mantle or forge their own path (despite the fact that many of them did) because they would always be overshadowed by their mentor, and that they therefore "had to" be erased from continuity.

DiDio's own comments (such as claiming that Captain Marvel "doesn't really fit" in the DC Universe—despite decades of doing so) has led people to think that he intentionally wants the DC Universe to be Darker and Edgier. Fans have noticed that under his reign, nearly every member of the humorous version of the Justice League was killed off or reinvented in a darker way. Certainly, Infinite Crisis was a direct play at fans' hopes that the the DC Universe would be less dark afterwards. In 2013, after accusations that Executive Meddling to prevent Batwoman from marrying her lesbian partner was homophobic, he came right out and declared that superheroes are meant to sacrifice any chance of happiness in their lives for heroism.

DiDio has so many people who dislike him that a rumor that he was going to get fired from his position ran like wildfire in 2008, but it turned out to be false. However, DiDio would finally be removed as co-publisher of DC in February 2020note The exact reasoning for his ouster has yet to be revealed, but speculation suggests that DiDio, a notorious micromanager, began heavily pushing work towards the so-called "Generation Five" initiative, stressing everyone out to the point where it was the last straw.

While primarily an editor, DiDio has done some writing work as well, including the following:

Before working at DC Comics, Dan was an executive at Mainframe Entertainment, overseeing the third season of Beast Wars, as well as the entirety of Beast Machines, where he told Marv Wolfman (original series outliner) to do as he pleased with Generation 1 continuity, and then told story editors Bob Skir and Marty Isenberg to ignore everything that came before them as "Beast Wars was too continuity-heavy". Between this and the big DCU reboot, one has to wonder just what continuity did to him as a child.

, but the claim is unsourced and is more than likely false.