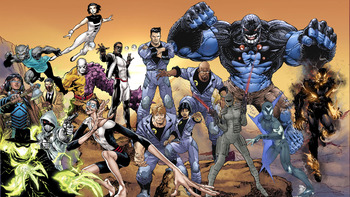 The New Age of DC Heroes! (...for a time, at least.)
Advertisement:

Dark Matter was an imprint of DC Comics that spun off from the Dark Nights: Metal event by Scott Snyder and James Tynion IV. It was intended to promote diversity, stronger writer-artist collaboration and dramatic reimaginings of characters and was overseen by then-DC Editor Dan DiDio.

Titles published under this banner are:

However, most of the books wound up becoming short runners. Out of all of them, The Terrifics managed to last the longest at 30 issues. (Even then, that series' last issues would end up becoming digital-only.)