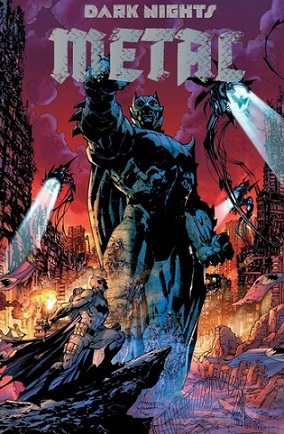 Dark Nights: Metal is a summer 2017 crossover event for DC Comics, continuing the narrative of the DC Rebirth saga. It is written by Scott "Doom Commander" Snyder and James Tynion IV, with primary art provided by Greg "Pain Bringer" Capullo.

Batman is hiding a deep, dark secret. A mysterious dimension, hidden away from all, is about to be uncovered. Its purpose is unknown, but it's connected to the mysterious and powerful Nth Metal used by Hawkman. And now, the Justice League is about to learn of this secret and prepare for the worst.

Gotham Resistance:Bats Out of Hell:

The event spins off the Dark Matter (2017) line of comics, an imprint intended to promote diversity, dramatic imaginings of characters, and stronger writer-artist collaboration.

All roads lead to the tropes below: