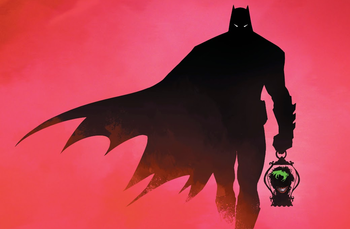 "There's no going back, people..."
Advertisement:

And… he was never Batman.

So begins this sprawling tale of the Dark Knight as he embarks on a quest through a devastated DC landscape featuring a massive cast of familiar faces from the DC Universe. As he tries to piece together the mystery of his past, he must unravel the cause of this terrible future and track down the unspeakable force that destroyed the world as he knew it…

Batman: Last Knight On Earth is a three-issue miniseries written by Scott Snyder and drawn by Greg Capullo as "the last Batman story", taking place in a post-apocalyptic world where the villains have won (then somehow subsequently lost) and an amnesiac Batman, allied with the severed head of The Joker, fights to learn how and why. It's part of DC Comics' Black Label, an imprint focusing on out-of-canon and imaginary tales.