Took a Level in Cynic 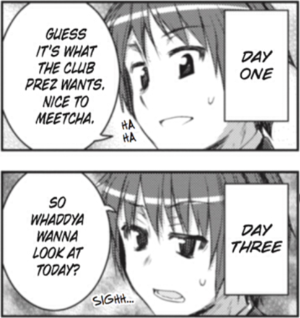 Yare yare...
"In every cynical person there is a disappointed idealist."
— George Carlin

The character gave the world their love, their care, their trust, and, in return, was somehow back-stabbed, deceived, taken advantage of, used. Some of their old optimism breaks, and they take it to heart that they should not trust others so easily. There is, however, a readjustment in expectations on how the world works towards the pessimistic, not an outright surrender, and not necessarily a change in methods either (an incorruptible character may choose to be a Doomed Moral Victor rather than adjust their methods) or even a change in attitude (The Pollyanna is perfectly aware of living in a Crapsack World, yet refuses to let it bring them down), let alone a Face–Heel Turn, as any Anti-Hero can attest. The Knight in Sour Armor is a classic example of an idealist who remains so at heart despite having taken several levels in cynic.

A Broken Pedestal can result in this; in a meta sense, the character perceives all of humanity to have failed to live up to his expectations, and revises them accordingly. The cause of the event is the Cynicism Catalyst. The result is usually the acquisition of Jade-Coloured Glasses. Can result in a Broken Bird, or, worse yet, a Despair Event Horizon. See also Silly Rabbit, Idealism Is for Kids!. See also Innocence Lost.

Contrast The Anti-Nihilist, Silly Rabbit, Cynicism Is for Losers! and Took a Level in Idealism.