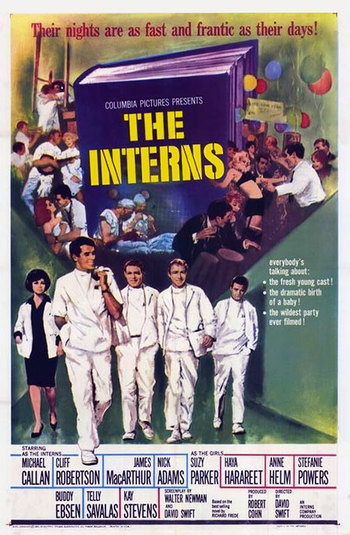 Variant form of Naïve Newcomer. The young guy (often the Plucky Comic Relief) who is still new to the whole place. He's often brilliant, almost always irreverent, and almost always "not ready for prime time" (i.e. throwing up the first time he sees a serious accident, etc). Commonly treated as a Butt-Monkey, especially if they're an unpaid intern, in which case whatever happens to them will be dismissed as "being paid in experience".

Often, it's clear that The Intern was a former Teen Genius, but is now learning that life is much tougher in the field.

Darker works will often have the employers treat the intern as a disposable Red Shirt; this is a subtrope, Disposable Intern.

See also New Meat, which is much the same trope but referring strictly to the military.