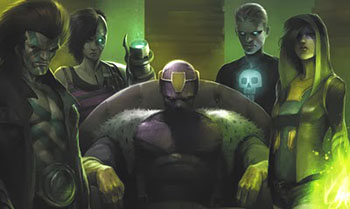 Can they go back to how things were? Or will they go native?
Advertisement:

A stand-alone story following the events of Avengers Arena. The survivors of Murder World are broken and came out the other side much different than they went in. Those psychological scars from the "Arena" weigh heavily on all of the kids and they don't fit so well into their old lives. They no longer feel like they belong and they're all looking for a way to get back what they've lost. All of this leads several of the surviving characters down the path of infiltrating Bagalia, a supervillain underground nation, and the Masters of Evil, in hopes of getting their superhero lives back... only to find that maybe they fit in better with the villains.

Note: The mere existence of this series spoils the outcome of Avengers Arena. If you have not read Avengers Arena, please read that first before reading the trope page as those spoilers will be unmarked.