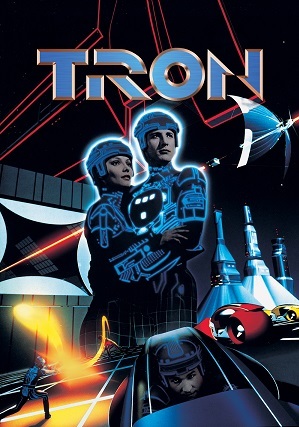 "A world inside the computer where man has never been. Never before now...

TRON is a 1982 Science Fiction film that marked the beginning of a multimedia franchise by Disney. It was written and directed by Steven Lisberger and released on July 9, 1982.

Video game developer Kevin Flynn (Jeff Bridges), trying to prove that a Corrupt Corporate Executive has stolen his videogame programs, is sucked into the digital world inside the computer, where anthropomorphic programs are consigned to fight for their lives in gladiatorial games. With the help of Tron (Bruce Boxleitner), an independent security program, Flynn must try to destroy the evil Master Control Program from within, bring liberty to the cyber realm, and find a way of returning himself to the real world.

Although computer-generated special effects had appeared in film as early as 1973, TRON marked the first time that computers were used to create something "real", rather than to just represent computer graphics (sort of "real", anyway, since the story takes place inside a computer). Ironically, a large portion of the special effects in TRON were actually hand-drawn; even the computer-generated objects and environments had to have their geometry entered by hand for every frame, since no practical method of automating the process existed at the time. In general, the light cycles, tanks, recognizers and the Solar Sail were CGI — however the huge amount of processing time required versus how much was available at the time required that they be rendered in black and white and hand-colored later.

Despite its bold look and bolder ambitions, especially for Disney which was sinking further into irrelevance at that time, TRON was a commercial disappointment (it didn't lose money, but wasn't the hit they had intended it to be). The proven box-office poison that the Disney name was for anything but outright kiddie stuff at the time, led to the creation of Touchstone Pictures two years later.

To add insult to injury, the Academy of Motion Picture Arts and Sciences considered it "cheating" to have used computers to create the special effects, resulting in the film not getting nominated for Best Special Effects. TRON's failure, along with AMPAS's anti-CGI prejudice, put CGI development on the back burner for years; while a few later productions made use of CGI elements (Return of the Jedi, Young Sherlock Holmes, Flight of the Navigator, and, most notably, The Last Starfighter), it would not be until 1989's The Abyss, and later 1991's Terminator 2: Judgment Day and 1993's megahit Jurassic Park, that computer-generated effects would become feasible in the eyes of Hollywood and the public. This development and the film's persistent cult fandom would cause the film to be popularly reevaluated as a bold experiment in computer visual effects. This was the only project in which legendary futurists Syd Mead and Moebius would collaborate (each working on different aspects of the cyberworld), with the addition of Electronic Music pioneer Wendy Carlos for the soundtrack.

1. The 2003 video game TRON 2.0 (in which Alan and Lora's son Jethro is transported into the cyber-world)

2. The continuity consisting of the film TRON: Legacy and its tie-ins. In publication order:

Useless trivia: a trailer for Tex, Disney's adaptation of the S.E. Hinton novel and the first film to use the Touchstone name in any capacity (this was before Disney formally established it as its brand for mature content), and an EPCOT promo were attached to original 70mm screenings.