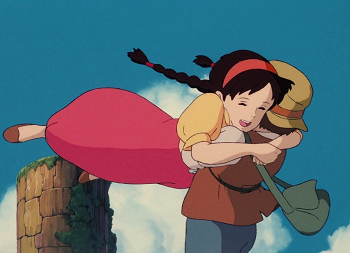 Spin her right round, baby. Right round!
Often seen after a Meadow Run (an Undead Horse Trope in itself) and in kitschy romances, the Twirl of Love occurs often when two characters haven't seen each other for a long time. One character - usually the girl - will attempt to glomp the other, and this occurs as an extension just before the two embrace or kiss passionately.
Advertisement:

This can be realistic if the guy is attempting to maintain his balance after being glomped, or if the glomper is significantly shorter than the glompee (a pretty common occurrence due to the One Head Taller rule). However, it really shouldn't take a full 360-degree spin for him to get his footing back, or else one would expect if it does take that long that the guy should have simply fallen over before it reached the 360-degree point. The extended period of time that the twirl goes on tends to carry this trope into Rule of Romantic territory.