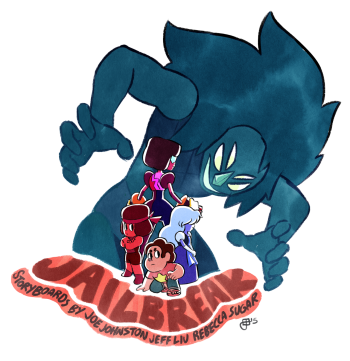 Steven wakes to beautiful, distant, ethereal singing and as he calls for the other Gems, is stricken breathless by the harsh memory of what happened to Garnet. He immediately launches into action, finding that the forcefield imprisoning him isn't much of an obstacle. He begins looking for the other Gems, and stumbles across another prisoner: a tiny red Gem no taller than Steven himself. Steven asks if she needs help. She freaks out and turns away, hiding her face from him... before it dawns on her that he's out. She asks how, and he demonstrates. On hearing the singing again, she immediately asks to be let out because she must! find! Sapphire! Even as Steven tries to learn the new Gem's name and who Sapphire is, the little red Gem is clearly panicked without Sapphire, and once safely out of her cell, begins racing up and down the halls screaming for Sapphire, who has paused in her singing.

The first occupied cell they run across, however, is occupied by Lapis Lazuli. Steven offers to let her out, but she refuses, saying that their captors will decide what will happen to her and to Steven's family when they return to Homeworld. She tells Steven that only accepting their fate will give them a chance. Steven insists that they must stand up to Jasper and Peridot because they're mean. Lapis says that's why there's no fighting them.

Steven: That's why we have to fight them.

The little red Gem, still quite distressed from being apart from Sapphire, snaps that she doesn't have time for this, and races off. Steven promises to come back for Lapis before attempting to follow her. It's too late: the red Gem is gone.

In his search, Steven hears Jasper and Peridot arguing. Peridot is still insisting that her mission has been disrupted, but Jasper cuts her off. As Steven hides from them, Jasper punches the wall to make Sapphire stop singing again. She then tells a sullen Peridot that Rose Quartz takes greater precedence than her mission. She orders Peridot to set a course for Homeworld. Peridot complies, grumbling about it all the while.

Once they're gone, Steven moves to free Sapphire, who has resumed singing. She is a blue Gem, also no bigger than Steven, and is surprised that Steven got out; she immediately realizes that it's his human half allowing him to move through the fields unhindered. The moment he lets her out, she hears the other Gem calling and runs off at Super Speed, dragging Steven along for the ride like a human-shaped banner.

Finally, Sapphire and the little red Gem spot each other across a chamber. Sapphire calls the other Gem's name: Ruby. Ruby and Sapphire rush toward each other and the pair meet in the middle of the chamber with a deep hug. There's a tearful reunion in which they each make sure the other is okay. Sapphire leans in to kiss Ruby's tears away, Ruby holds her up and they do the Twirl of Love, laughing with overflowing happiness at being together once again. As they spin around, they begin to glow and merge, and before Steven's very eyes, the light crescendos, revealing the new, joyously re-fused GARNET!

Garnet gratefully thanks Steven, and apologizes for his having found out this way that Garnet was a fusion all along. Steven takes it in stride and asks if he made a good first impression on the Gem duo.

Jasper's approach sounds in the distance, and Garnet tells Steven to go find Amethyst and Pearl, then get to the bridge. Steven says he has no idea where they are, but a kiss on the forehead transfers her Future Vision to him again. Steven worries about Garnet fighting Jasper again, all by herself. Garnet isn't worried in the slightest.

Jasper arrives, and expresses disgust that Ruby and Sapphire have fused again into Garnet, sneering that fusion is just a cheap trick to make weak Gems seem stronger. She dismissively says she's already seen what they are. Garnet laughs and says Jasper really hasn't. As the fight begins, Garnet pretty much tells Jasper off while gracefully and acrobatically dodging the big, beefy Gem's attacks. The telling off takes the form of a song, in which Garnet explains the source of her strength and power.

Steven frees Amethyst and Pearl and they race to the bridge. They quickly subdue a petulant Peridot, tying her with Amethyst's whip, and Pearl takes over the ship, returning its course to Earth. Meanwhile, the fight between Garnet and Jasper has devastated the insides of the handship — their brawl knocks them through level after level. Garnet throws Jasper into the reactor core of the ship, causing an explosion that disables the ship and sends it crashing to Earth.

Thanks to the shake made by the exploding core, Peridot gets free of Amethyst's hold, worms her way to an escape pod and launches to Earth. Garnet gets to the bridge to inform everyone the ship is going down and they need to prepare for the crash. Steven says Lapis is still imprisoned, but Garnet says there's no time. The ship crashes to Earth, landing palm open on the hill atop which the temple is built. Lion searches the wreckage until he finds them and roars to free them. Steven's bubble has saved them again, and Steven is delighted that Garnet is a fusion all the time. Amethyst and Pearl are astonished, but a little dismayed since they planned to introduce him to Ruby and Sapphire as a birthday surprise and now they can't. Steven jokes that they can still do it and he'll pretend to be surprised.

There's movement in the wreckage. Jasper lives! She's weak, and wounded, but not down. She angrily sneers that the only reason Garnet beat her was because of fusion — something the huge Gem had derided as a cheap trick. She grumbles that they'd have no chance if she had someone to fuse with. More movement in the wreckage reveals that Lapis Lazuli has survived as well. She spreads her water wings and attempts to fly away, but Jasper is too quick; she snatches the blue Gem by the ankle and pulls her to the ground. Jasper asks Lapis to fuse with her. Lapis is appalled and astonished at the very idea. Steven cries out to her not to do it. Jasper reminds her how much she hates the Crystal Gems, how long they kept her a prisoner, and how they're traitors to their own kind — that it would be Lapis's opportunity for revenge. She just needs to say "Yes".

Lapis thinks about it for a second then comes to a conclusion. She offers her hand to Jasper, to the Crystal Gems' dismay. Jasper does a quick fusion dance with a passive Lapis, then turns to grin evilly at Garnet, in anticipation of a brutal beating. The fusion turns the two gems into a new, horrifying, monstrous fusion: Malachite — who is a giant of a creature. She has six arms, four of which she uses as legs. And now, with access to Lapis's water powers, she laughs, and summons a giant water hand —

— which suddenly turns into a shackle around Malachite's arm. Jasper's voice demands to know what Lapis is doing. Lapis replies that she's done being anyone's prisoner. More and more water chains clamp around Malachite's appendages, and begin dragging the struggling fusion Gem inexorably into the ocean. Jasper protests, and struggles to break free, but Lapis's will is so strong that Jasper cannot break free from the fusion. Lapis pulls Malachite's body into the depths.

Malachite: [in Lapis Lazuli's voice] Let's stay on this miserable planet — together!

As they vanish beneath the waves without a ripple, the Crystal Gems and Lion are all standing in stunned awe at how it has all ended. Garnet breaks the silence.

Garnet: Yikes. They are really bad for each other.

The silence begins to close in again but a small sound interrupts: Steven's smartphone. He picks it up, still so shaken from his experiences he can barely say hello. On the other end is an alarmed Connie, who got his message and is calling to make sure he's all right.

See you next season, folks!