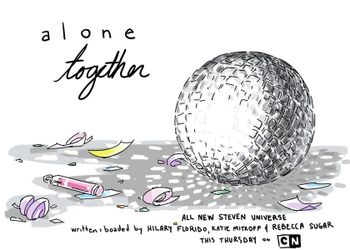 In the temple, Pearl snaps her fingers as Steven and Amethyst dance together — or, attempt to. Amethyst isn't taking it seriously, and Steven, as a result, is too giggly to do so. There's a montage of him trying to dance with each of the Gems, and each of them displaying their type of dance for him, with him trying to imitate or at least replicate their moves. He's a little awkward and doesn't have the natural grace the Gems do. In the end, he ends up winded, and the Gems offer him reassurance, telling him that fusion is not something you get on the first try.
Advertisement:

Pearl expresses doubt that Steven's half-human body is even capable of fusing. Amethyst says there's no telling what could happen with Steven. Garnet, as usual, expresses confidence that Steven will be successful.

Later, on the beach, Steven is sitting with Connie and telling her about the experience of trying to learn to Fusion Dance, but that he can't seem to get it. Ever supportive, Connie asks if writing the steps down will help. Steven tells her that he's not sure that's the problem, but that it's something else. Connie confesses that she likes to dance, and was really excited about a dance at her school, but ended up not going because she kept thinking about everyone staring at her. Steven points there's no one staring now (except him, as Connie notes). He clarifies that he meant he was asking her to dance. Connie accepts Steven's invitation and takes his hand. As the sun sets on the water, the two kids dance together, but as things go with kids their age, it goes from serious dancing to silly, playful dancing. Connie bumps into Steven by accident, and he begins to lose his balance. She lunges to catch him so he doesn't fall. As their foreheads touch and the pair laugh, blushing and drawing together, there's a pinkish glow from below them...

...and when Connie opens her eyes, she wonders why Steven's sandal is too small for her... his feet. A hand goes from a foot, up past an unexpectedly long leg, to a pair of jeans shorts-clad hips, to a narrower waist with Steven's pink rose quartz gem, to Steven's pink star shirt with Connie's pale turquoise dress over it, though they're both just belly-shirt height on the new body, which has flowing black hair and big dark eyes. After a moment the pair realizes what has happened:

Their new voice: I'm a fusion.

The fusion rushes back to the house to tell the Gems what has happened. Pearl is amazed, but not in a good way.

Pearl: He... fused? With his friend Connie?
...
Pearl: But this is unprecedented! A gem fusing with a human being? It's impossible!... or at the very least, inappropriate...

Amethyst thinks it's cool, and Garnet is speechless with delight at first. Amethyst rushes up to the new fusion, full of questions.

Advertisement:
Amethyst: Wow! You look great together! How does it feel? Steven? Connie? Stev-onnie?!

Pearl, still alarmed, tries to get them to separate, but the fusion calls Pearl out for being worried that Steven couldn't fuse, and demands to know if she's not proud of him. Pearl stammeringly says she is, and asks Garnet to back her up. But Garnet has her own ideas on how Steven and Connie should deal with being fused.

Garnet: Stevonnie. Listen to me. You are not two people. And you are not one person. You. Are an experience! Make sure you're a good experience. Now. Go. Have. Fun!

Stevonnie does just that: they use their new, tall, powerful body to run at top speed, do cartwheels, and do a cannonball off the clifftop into the sea. After coming out of the ocean, Stevonnie goes to the Big Donut, and orders two donuts. Lars stammers and can barely speak in Stevonnie's presence. At first, it looks like Sadie is jealous of Lars' attraction to the tall, attractive newcomer, but she offers them the donuts on the house, blushing and indicating she finds Stevonnie attractive as well.

Stevonnie has a momentary bit of awkward discomfort: Steven and Connie would each get one donut, but Stevonnie is both of them in the same body with both consciousnesses. One side of Stevonnie offers to end the fusion, but the other side says not to worry. Sour Cream approaches and offers Stevonnie a flyer inviting them to a rave with a bunch of friends from the internet and free glow sticks.

That evening, at the rave, Beach City's teen population are dancing. One teen seems to think himself as outclassing the others. Stevonnie, still barefoot, steps onto the floor and shows off their moves with an elaborately beautiful routine that results in everyone staring. Stevonnie becomes self-conscious because everyone has stopped dancing to stare at them. The sneering boy decides Stevonnie is the only person there worth dancing with and joins them on the floor. Connie's self-consciousness brings on a panic attack in Stevonnie, and they run off the floor wondering why it's not fun like they expected.

Kevin asks Stevonnie why they left him on the dance floor. Stevonnie says they don't feel like dancing anymore but Kevin is insistent, arrogantly declaring the two of them "angels walking among garbage people". Stevonnie is put off, insisting he doesn't even know them. They say they just don't like being alone here. Kevin insists that the cure to their loneliness is to come back and dance with him. Exasperated and irritated by his clueless and arrogant persistence, Stevonnie snatches his arm and drags him back to the dance floor, making one important clarification:

Stevonnie: And it's Stevonnie. I am not your "baby".

Stevonnie's dance routine this time is much angrier and less graceful. Kevin is taken aback and tells them to bring it back. But now that Steven and Connie are displeased and angry with Kevin, their fusion ends: Stevonnie vanishes in a puff and Steven and Connie end up sprawled on the dance floor. Kevin is weirded out that his hot dance partner was really two kids and takes his immediate leave. Steven and Connie, happy to be two individuals again, enjoy dancing together as Sour Cream showers the floor with glow sticks.

Steven, a Human-Gem hybrid, accidentally fuses with the human Connie and they become Stevonnie. Their fusion then becomes a visible sign of their growing romantic interests for each other as the series progresses.

Steven, a Human-Gem hybrid, accidentally fuses with the human Connie and they become Stevonnie. Their fusion then becomes a visible sign of their growing romantic interests for each other as the series progresses.