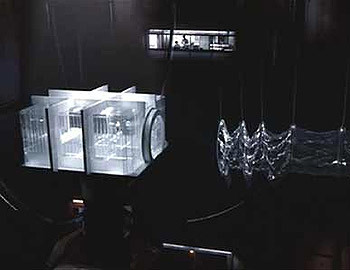 "You know this plastic prison of theirs won't hold me forever, Charles."
"...she did confine thee,
By help of her more potent ministers
And in her most unmitigable rage,
Into a cloven pine; within which rift
Imprison'd thou didst painfully remain
A dozen years..."
— Prospero, The Tempest

A personal Alcatraz made with special precautions to stop this one person from escaping. If they have a super power, then it likely incorporates either a Power Nullifier or mechanisms that are power-proof.

Eventually the villain will break out, but to be fair to the prison's designer, they usually can't escape on their own. They might get some help from their henchmen, some Unwitting Pawn, or an ill-advised upstart villain exploiting the prison's Fantastic Fragility. Since such prisons are designed for one occupant, they may be ineffective against the powers of another, leading to a variant on the Opponent Switch.

The purpose of the Tailor-Made Prison in a story is usually one to give a villain street cred: they must be really bad to merit it. Also, a previous Big Bad can be considered to be Commuting on a Bus when in the prison. They’re being kept around with a plausible reason to be cooling their heels instead of raising hell and can be sprung out when dramatically convenient. Considering that any villain who merits such attention very likely has Joker Immunity in a world of Cardboard Prisons, the builders of the place may be fully aware that this is a temporary solution but hope it will give them, at least, a few months of peace.

There are generally skeletons — Back Story Red Shirts — hanging about to indicate that this is not a normally escapable place.

Sometimes this is the purpose of the Phantom Zone. Compare Sealed Evil in a Can for those immortal villains who can't be held by a mere custom-designed prison but can overlap if their can is custom made. Compare also Shipped in Shackles, which is the mobile version of this trope. For added psychological trauma, may be paired with The Aloner. Sometimes combined with Gilded Cage. See also Crystal Prison for a common cage.

Cardboard Prisons occur when these are circumvented way too often and way too easily.

Rioichi's prison-cell is suspended over a gorge where the only bridge leading to it has fire-spewing dragon-statues and flashlight guards.

Rioichi's prison-cell is suspended over a gorge where the only bridge leading to it has fire-spewing dragon-statues and flashlight guards.