Breaking Out the Boss 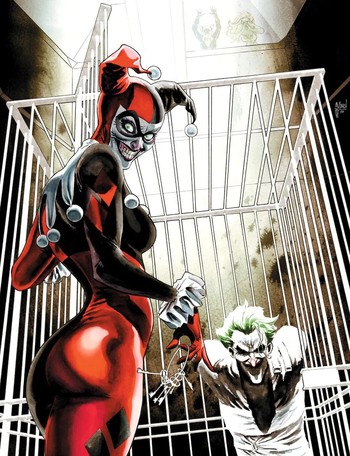 When a character, most often The Dragon, The Renfield or Sycophantic Servant, breaks the Big Bad out of an imprisoning entity. This is most commonly done either in the form of freeing the Big Bad from a Tailor-Made Prison, or breaking out a Sealed Evil in a Can. Sometimes, this will be part of an Evil Plan thought out by the Big Bad.
Advertisement:

For cases where the Big Bad in question was brought Back from the Dead, see Resurrect the Villain. Compare Pet Gets the Keys.

This has no relation to individual video game bosses being set free to fight you, although this does overlap (usually with Final Bosses).

The person or entity is fully cognizant:

The person or entity is only partially cognizant:

The breakout backfires on the liberators:

Examples for which explaining the nature would constitute a spoiler (spoilers unmarked!):

Bentley's first objective in "Jailbreak" is to break out Sly.

Bentley's first objective in "Jailbreak" is to break out Sly.