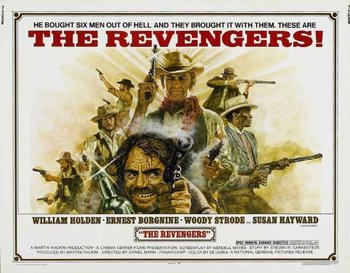 The Revengers is a 1972 Western film written by Wendell Mayes based upon a story by Steven W. Carabatsos. The film was directed by Daniel Mann and stars William Holden and Ernest Borgnine.

The life of peaceful rancher John Benedict (Holden) is torn apart when his family is massacred by a gang of marauding outlaws and his farm is destroyed. He assembles a team of mean, lawless convicts to act as his posse as he pursues the gang responsible for the deaths of his loved ones.

The Revengers contains examples of: