Film / For a Few Dollars More 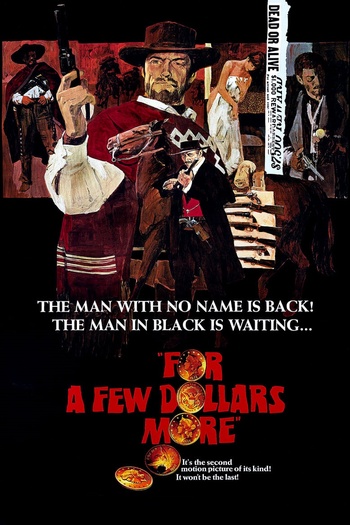 "Where life had no value, death, sometimes, had its price. That is why the bounty killers appeared."
— Title Card
Advertisement:

For a Few Dollars More (1965) is considered as one of the greatest films of the Spaghetti Western, and a masterpiece of Sergio Leone. It's the second film in the Dollars Trilogy, A Fistful of Dollars being the first and The Good, the Bad and the Ugly being the third. Even That Other Wiki named this film as an Epic Western. And for bonus, the intro theme

, along with The Good, the Bad and the Ugly theme, is the most known and memorable in the Sergio Leone's Western films.

The Man with No Name (nicknamed "Manco", Italian and Spanish slang for "missing one hand", because he does nearly everything with his left hand in order to keep his right hand free to draw and fire) (Clint Eastwood) and Colonel Mortimer (Lee Van Cleef), a skillful Bounty Hunter, are both hunting the famed gang leader El Indio. The Man With No Name is motivated by money; the Colonel, we come to discover, is motivated by revenge. After the two bounty hunters clash, they put aside their differences and team up to capture Indio. As part of their plan, Manco infiltrates Indio's gang by busting one of Indio's friends out of prison. However, the plan does not work out as hoped.

For a Few Dollars More provides examples of the following tropes: