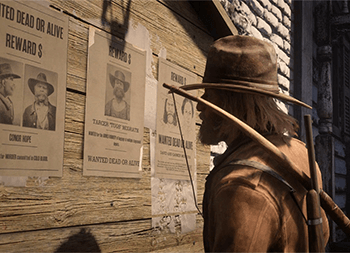 There ain't no more cowboys
Only men with violent hearts
"Where life had no value, death, sometimes, had its price. That is why the bounty killers appeared."
— For a Few Dollars More
Advertisement:

Born of the Old West but found in many other genres since, the bounty hunter makes a living pursuing criminals for the price on their heads. His line of work often makes him gruff and cynical, if he lives long enough, and in the eyes of some citizens, he may be only slightly better (or worse) than the criminals he hunts.

Sometimes, the bounty hunter captures criminals and brings them back to face trial (which is how real bounty hunters operate nowadays). But other times, especially in Westerns, the bounty hunter's reward is of the "Dead or Alive" variety, and many bounty hunters of the latter type kill their bounties rather than let them Run for the Border. These kinds of bounty hunters are often called "bounty killers" or, more pejoratively, "assassins" or "headhunters". This has almost never been Truth in Television, though that problem can be Hand Waved if the bounty in question is exceptionally dangerous, put out by a criminal, or wanted by a corrupt, tyrannical, or failed state. Or if this occurs in a fictional setting, obviously.

The bounty hunter is one of the most diverse roles and depending on their choices (and their employers) they can be anything. Sometimes the Bounty Hunter is a villain, a sadist who profits off the death and suffering of others and who couldn't care less about justice. In that case, the best they can possibly be is a Nominal Hero who may hunt villains and do the right thing for all the wrong reasons. If that's the case then it is almost guaranteed that they will come in conflict with the heroes either because their head promises the biggest paycheck or because they want to be the one to capture the criminal and won't hesitate to kill and become a criminal over it themself. Sometimes they’re a Glory Seeker who wants to bring down the toughest targets. More often, though, they are just a working stiff who tries to do the right thing — or something close to it. Buried deep within they’re grizzled, world-weary exterior is still an idealist with a heart of gold. Because there is nothing that prevents a Bounty Hunter from taking both legal and shady bounties, this character is usually a Lawful Neutral.

The Bounty Hunter is increasingly popular in Speculative Fiction ever since Boba Fett made it cool. It helps that space is thought of as another "frontier", and Western tropes go well with science fiction. And since it's so cool, most often bounty hunters in fiction are depicted as extremely skilled individuals and will prove a challenge for the main characters unless they are either there just to show us how overpowered our hero is or if the bounty hunters are themselves the main character(s).

When in the company of actual bounty hunters, you will speak of them as "bail enforcement officers". Except for that one robot who prefers the term "freelance peace-keeping agent, yes?"