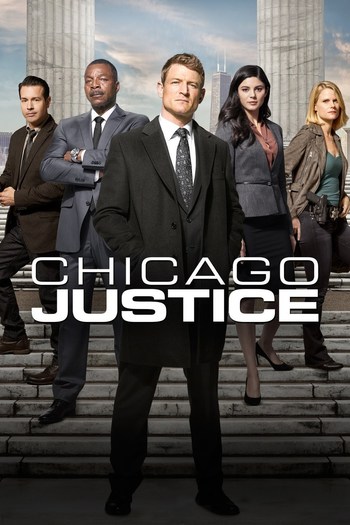 Always Fight. Never Settle.
Chicago Justice was an NBC Law Procedural and the fourth installment of Dick Wolf's One Chicago franchise, having spun-off from Chicago P.D., itself a spin-off of Chicago Fire.
Advertisement:

Set in the Illinois State's Attorney office for Cook County, the show focused on the efforts of Assistant State's Attorney Peter Stone (Philip Winchester) and his team's attempts to enforce justice through Illinois's legal system while navigating Chicago's complicated racial and political battlegrounds.

No relation to Chicago Hope or The Chicago Code. We think.

This show was similar in execution to Law & Order: Trial by Jury.

Unlike the other members of the Chicago franchise, however, it flopped, getting canceled after just one season.