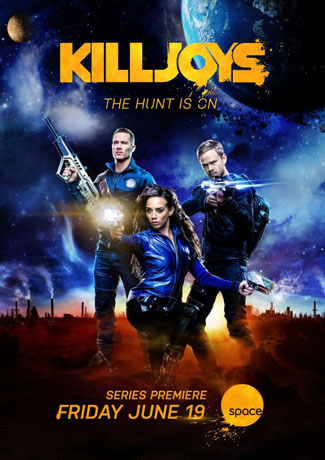 Killjoys is a Canadian-American science fiction series; a co-production between Space Channel in Canada and Syfy in the U.S. It ran for five seasons from 2015 to 2019 and starred Hannah John-Kamen, Aaron Ashmore, and Luke Macfarlane.

The series takes place in a distant planetary system known as the Quad, ruled over by the morally ambiguous Company and kept peaceful (mostly) by Reclamation Agents or "Killjoys" - bounty hunters that track down and transport wanted items and individuals at the behest of various warrants. One such team of Killjoys consists of John Jaqobis (Ashmore) and Dutch (John-Kamen). The two are thrown for a loop when John's long-lost brother D'avin (Macfarlane) shows up with a bounty on his head, and through several incidents manages to be inducted into their team. Though they try to play by the rules and keep their heads down as they go after their warrants, the dark pasts of all three begin to catch up with them.

All spoilers prior to Season Four are unmarked.