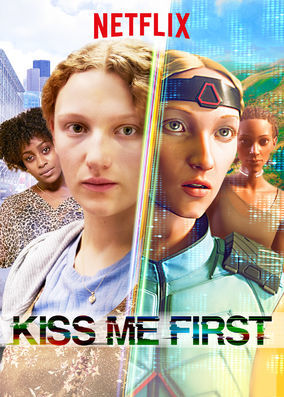 Kiss me First is a 2018 British Sci-Fi Thriller distributed in the UK by Channel 4 and worldwide by Netflix.

Leila is a lonely young woman. Her single mother just passed away and she has to rent the spare room in her house and take a job at a small internet cafe to make ends meet and maintain her habit of Azana, an MMO Wide Open Sandbox computer game. There, she finds "Red Pill", a group of youths who gather in areas inaccessible to other players, created by their leader Adrian, who seems to have unusual freedom and control within the game. Leila soon meets and befriends Mania (Tess). But all is not what it seems. As events develop, it seems Adrian's intentions aren't as charitable as he claims and his influence over the members of Red Pill is leading them in dangerous directions. Now it's up to Leila to fight and expose Adrian before he drives the whole group to self destruction.