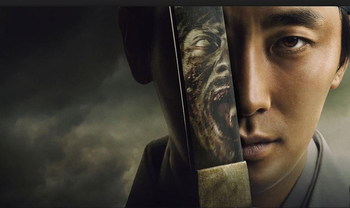 You shall know our hunger.
Advertisement:

Kingdom (Korean: 킹덤) is a South Korean television series depicting a zombie outbreak in Feudal Korea, written by Kim Eun-hee (Signal) and directed by Kim Seong-hun (A Hard Day). It is loosely based on Eun-hee's webcomic series The Kingdom of the Gods. The show was released worldwide by Netflix in 2019, followed by a second season in March 2020. A third season is rumoured to air in 2022. A prequel spin-off movie titled Kingdom: Ashin of the North aired in July 2021.

In the Joseon Era (late 14th- to late 19th-century), when the country was recovering from the Imjin War

, word on the street is that the King of Joseon is dead. The powerful Haewon Cho Clan is in almost complete control of the government, and its head, Chief State Councilor Cho Hak-ju (Ryu Seung-ryong of Seoul Station), suspects that the Crown Prince Lee Chang (Ju Ji-hoon) is behind said rumours. The Prince determines that something is seriously wrong with the King and goes to the countryside to investigate matters while being pursued on charges of treason by Cho's force. Meanwhile, in the countryside, physician Seo-bi (Bae Doona of The Host (2006) and Sense8) notices that villagers are dropping dead rapidly, but that will soon be the least of her worries...

Ashin of the North contains examples of: