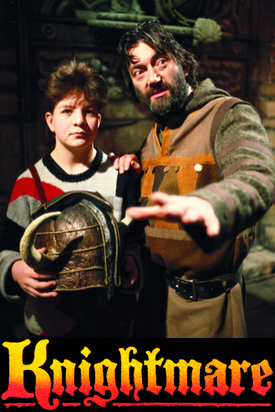 The only way is onward, there is no turning back...
"Ooh, naaaaaasty."
—Treguard Once an Episode
Advertisement:

Knightmare is a revolutionary kids' TV show produced by Anglia Television for broadcast on ITV that is a blend of a TV show, an RPG and an Adventure Game. The basic premise is that children in teams of four challenge the Dungeon of Deceit. The game was unashamedly difficult for a kids' TV show: over the eight years that the show ran, over eighty teams entered but only eight teams actually won. Not a single team won in the first and third years.

The reason for the popularity of Knightmare was the way the dungeon was fought. One member of the team walked around a room with a Blue Screen while the other three guided him. In order to explain why he needed guiding, the Dungeoneer wore "The Helmet of Justice" that basically blinded him to everything more than about a foot away. The puzzles were heavily focused on riddles of wildly variable difficulty and lateral thinking. The Dungeon Master, Treguard (played by Hugo Myatt, husband of Anglia news anchor/continuity announcer Katie Glass), was a wonderful character. Whilst on the children's side, giving advice where needed, he was also more than a little sarcastic and seemed to be just as happy whether the teams won or lost.

Spawned a number of Gamebooks, a board game and two Video Game adaptations.

Not to be confused with the Humongous Mecha from Code Geass. Or the Konami game.

The series is currently being repeated on Challenge TV in the UK. A new episode was filmed for Youtube's "Geek Week" in August 2013, handled by the original cast and crew, guest starring various UK Youtube personalities as the players.

The gamebooks provide examples of:

Treguard: Warning, Troper. Complete temporal disruption approaching. Time is now the enemy.
(fireplace freezes)
Treguard: Oh, dear. Temporal disruption complete. Time flies as the Romans would say, and although all continues in your world, here time has flown. All editing and troping must now cease until you phase with us once more. Will these editors triumph on the next page? Or will our Troper have their life ruined by all of the other pages on this site? And if so, why should you care? For here, nothing is real and everything must surely be an illusion. Join us again for Knightmare. And just keep telling yourself, it's only a game... isn't it?