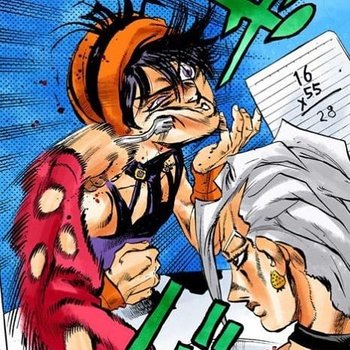 The chapter this happens in is their first appearance, by the way.
Nappa: You okay, Vegeta?
Vegeta: Yes, jus—just an aneurysm out of sheer stupidity.
Nappa: Wow. Didn't think you were that stupid, Vegeta.
[Vegeta screams in frustration]
— Dragon Ball Z Abridged
Advertisement:

Have you ever heard a remark so spectacularly dumb that it just made you angry? Do you have a low tolerance for Cloudcuckoolanders or ditzes?

While some might respond with sarcasm, pity or even despair, these characters just can't handle the dumbness around them. They seethe, they rant, they curse or even resort to violence.

When this trait kicks in it can be the last straw for a normally reasonable person or an intense enough irritation to be their Berserk Button — especially for the Only Sane Man or those Surrounded by Idiots. Of course, this reaction is sometimes totally justified when the act of foolishness is or has put people in danger.

The results of becoming Enraged by Idiocy can vary from a Dope Slap to a Cluster F-Bomb to acts of violence. As with any loss of temper, this usually becomes a weak point or dangerous distraction for the angry party — making it a handy tactic for anyone merely playing dumb.

A Sub-Trope of Berserk Button. Characters who are the Only Sane Man, Surrounded by Idiots, or an Insufferable Genius tend to have this, but it is also one of the main Jerk Justifications. You can expect the Tsundere to have this characteristic, especially if she's around the Idiot Hero. They may also show someone to be The Comically Serious. This is also a central trope in a Boke and Tsukkomi Routine, where both the boke's idiocy and the tsukkomi's resulting frustration are Played for Laughs. If used excessively, this Trope can turn the Straight Man of the cast into a straight-up Jerkass, whom although gifted with intelligence, is an emotionally hollow brick wall with an exasperating "cup half empty" attitude towards life, refusing to see the good in people favor of justifying his sarcasm and hate for the world by arrogantly accentuating every little flaw in everyone else but himself.

If both the persistant idiocy and the inability to treat the anger go on for too long, it can go into Madden Into Misanthropy territory.

If the enraged character is a leader and the idiocy was committed by a mook, this can lead to You Have Failed Me.

Compare and contrast Blunder-Correcting Impulse. If this is exploited, it can be a form of Correction Bait.

After spending a day having to deal with Mr. Brittas' constant annoyance and idiocy, Graham Hanson goes on a rant and tells everyone to leave the leisure centre while they still can.

After spending a day having to deal with Mr. Brittas' constant annoyance and idiocy, Graham Hanson goes on a rant and tells everyone to leave the leisure centre while they still can.