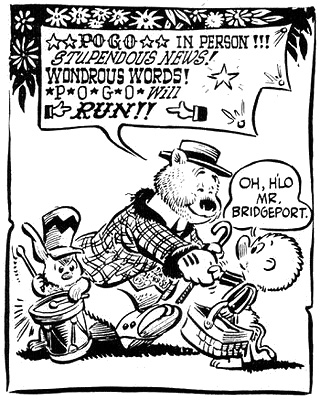 A circus barker speaking in a circus poster's typeface.
Advertisement:

Painting the Medium is modifying the presentation of a story in order to convey information about the story. A comic book might give a character special-looking Speech Bubbles that reflect on their personality. A TV show might change to black-and-white or sepia-tone during flashbacks. A video game might change its GUI to show a change in the player character or the setting.

By Painting the Medium, a creator turns a transparent tool—meant to show the work behind it—into a part of the work.

This is typically done for one of several reasons:

Some of the most popular variants have become so conventional that we stop noticing them completely—for example, dialogue written in ALL CAPITAL LETTERS is shouted. Heck, even we do it (check the entries in Self-Demonstrating Article why not?)

See also Rule of Perception. Unless the characters themselves remark or interact with the audio or visual effects, then it can't be concluded they occur within the setting, so they must only be presented to the audience's side of the fourth wall. The characters who do remark on these tropes may be uncommonly Medium Aware, or they may know that their particular universe is governed by metafictional laws, in which case the 'paint' isn't just on the medium, it's integrated into the text.

Please note: This trope is not 'Character interacts with the pages of the book/panels of the comic/film camera/suitable alternative for their story'—that trope is Medium Awareness. This trope is 'The setup, layout or presentation of the book/comic/film/whatever is changed to reflect a change in the characters' situation'. Please don't put incorrect examples on pages they shouldn't be on, thank you. Splatter on the camera lens may be acceptable as a way of showing just how much rain/blood/liquid is flying around the scene at that point.

open/close all folders
Comedy
Films — Animation
Music
Music Videos
Opera
Print Media
When her mother is in the parlor we sit
LIKE.................THIS
But after mother retires we always sit
LIKETHIS
And sometimes (don't be shocked) we sit
LIKE
THIS
Professional Wrestling
TV Tropes
Real Life
Feedback

During Scott's escapades into his own mind to figure out the blue border, the border actually closes around Scott when he gets stressed and he literally has to break out of it.

During Scott's escapades into his own mind to figure out the blue border, the border actually closes around Scott when he gets stressed and he literally has to break out of it.