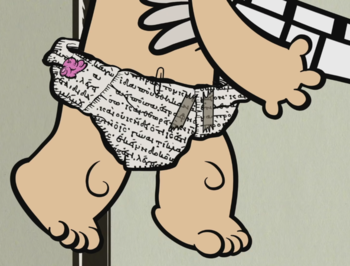 Jo: Is that a shirt and duct tape?
Charlie: Yeah.
Gabe: I call it the Shirt Diaper. The good thing is, that's she's protected, and it's not my shirt.
— Good Luck Charlie, "Charlie in Charge"
Advertisement:

So you're nearly complete with the dreaded Diaper Change. The dirty diaper has been disposed of; the baby's bottom is clean. All that's left is to put a clean diaper on its bottom. But oops, there aren't any clean diapers available. What are you going to do? After all, you don't want the baby to have an accident all over your nice clean floors. The Answer? Find the nearest available resource and wrap it around the baby's bottom.

A Sub-Trope of Improvised Clothes. This trope is most often used when the caretaker is taking care of a child under the age of three years old and has little to no experience in changing diapers, particularly if the caretaker is a male. Overlaps with Wearing It All Wrong if another piece of clothing is used as a diaper.