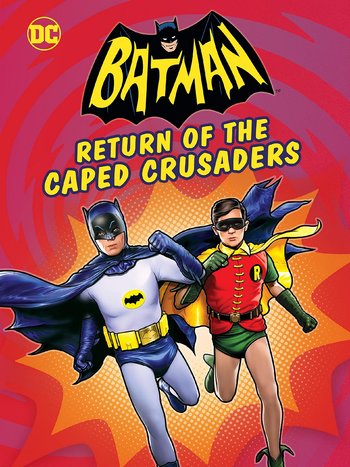 Holy animated tribute! They're back!
Advertisement:

Batman: Return of the Caped Crusaders is a 2016 Direct to Video animated movie which is part of the DC Universe Animated Original Movies. A 50th anniversary tribute to the 1960s Batman series, it sees three of the show's original actors reprising their roles: Adam West as the Caped Crusader, Burt Ward as the Boy Wonder, and Julie Newmar as Catwoman.

It's back to the 1960s as Batman and Robin spring into action when Gotham City is threatened by a quartet of Batman's most fiendish foes — Penguin, The Joker, Riddler, and Catwoman. The four supervillains have combined their wicked talents to hatch a plot so nefarious that the Dynamic Duo will need to go to outer space (and back) to foil their arch enemies and restore order in Gotham City.

Batman: Return of the Caped Crusaders provides examples of: