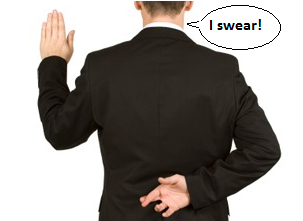 Sometimes when a character is forced to make a vow, oath, promise, gesture, etc. they don't actually mean, they will cross their index and middle fingers in a way hidden to the character they're talking to but visible to the audience, to show they're actually lying. Most often the person will have their crossed fingers held behind their back, but off to the side, under a table, or somewhere else hidden is also possible.

Truth in Television, of course, which is the reason why it works as a visual cue, often in the form of An Insert. There's a number of guesses out there as to why it became a common gesture for lying, but the general idea is that it somehow either protects you from the consequences of lying or absolves you from being held to your word to begin with. In real life, this gesture is mainly used by children, especially since it's not a reasonable thing for an adult to do. Therefore, the trope is generally associated with characters who are very young or just act like they are.

It can also be used as an Out-of-Character Alert, both in-universe and Real Life, to signal to other people that a statement or gesture was made under coercion or otherwise insincerely. A simple example as such would be military prisoners of war being forced to participate in videos/photos either making it look like their captors was caring for them, or that the prisoners were renouncing their political beliefs. A discreet crossed finger or leg on film would be an indicator back home that the message was falsified in some way.

Not to be confused with visually similar "fingers crossed" used as "Good Luck" Gesture.

Pete claims he wouldn't dream of cheating while crossing his fingers, to symbolize he's lying.

Pete claims he wouldn't dream of cheating while crossing his fingers, to symbolize he's lying.