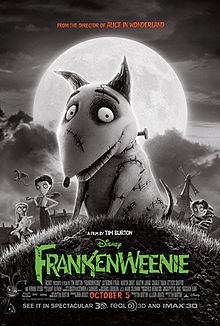 Frankenweenie is an unusual film from the mind of Tim Burton. The movie is a remake of a short movie with the same name

Victor Frankenstein is a young boy with an interest in science. He doesn't really have many friends, but he really does love his dog Sparky, and even creates movies starring him. After Sparky is killed by a car, Victor learns at school about electrical impulses in muscles, and gets the idea to bring his pet back to life. He creates elaborate machines which bring down a bolt of lightning that revives the dog. While Victor is pleased, his neighbors are terrified by the animal, and when the Frankensteins decide to introduce the revitalized Sparky to them, they become angry and afraid.

The movie was first made as a short film in 1984 by Tim Burton for Disney, which resulted in his termination from the studio under the idea the movie was too scary for children. The film was shelved and didn't see the light of day in American theaters (it was initially supposed to be attached to reissues of The Jungle Book and then Pinocchio prior to this), though it managed to secure a theatrical run in the UK. Despite the trouble, the film caught the attention of Paul Reubens, who would champion Burton for directing on his film Pee-wee's Big Adventure, which would be Burton's feature length film debut.

The film received a feature length remake as a black and white stop-motion animation film in 2012 with Tim returning as director and his long time composing partner Danny Elfman. The cast includes Catherine O'Hara, Winona Ryder, Martin Landau, Martin Short, Robert Capron, Atticus Shaffer, Charlie Tahan and Conchata Ferrell. This version expands the story with some of Victor's fellow students discovering Sparky's miracle revival and deciding to create their own monster animals out of pets both living and dead. This only serves to bring more chaos to the town.

This was Disney's last theatrically released horror film for seven years, until 2019’s Ready or Not (albeit via Searchlight Pictures).