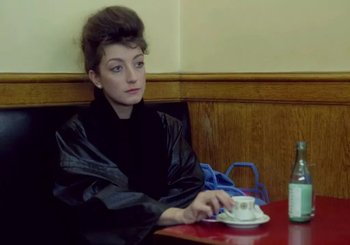 Louise (Pascale Ogier) is a recent art school graduate getting a start on her interior design career. She lives with her boyfriend Rémi (Tchéky Karyo) in a housing development outside Paris, which he's helping to build as an architect. Rémi is moody and tempestuous, more interested in playing tennis than socializing. Bubbly Louise misses life in the city and, with his permission, spends her nights partying without him (though he sometimes shows up for a few minutes). Despite their insistence that they're completely fine with this arrangement, they're actually suspicious of one another, especially since Louise has started renting an apartment in Paris as a place to hang out away from the suburbs, and is spending more and more time with her Platonic Life Partner Octave (Fabrice Luchini), who's married to someone else but still has strong feelings for her.

On the night of the full moon, she has a fling with yet another man, Bastien (Christian Vadim, son of Catherine Deneuve and Roger Vadim). But this starts of a series of events that will turn her world inside-out.