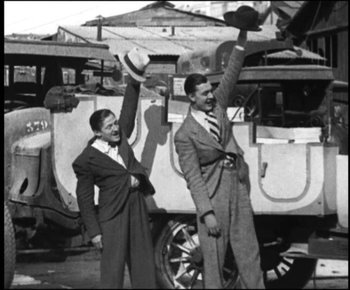 Two unnamed bums (Jacques Tati and a comedian named Rhum) are thrown out of a subway station where they were apparently sleeping. Looking for a way to get some cash, they acquire an open-air bus and put out a sign advertising a day trip out to the country to see "the chateau". They scam some unwitting tourists into their bus and make their way into the country, only to prove themselves comically inept tour guides.

Surprisingly similar to the sort of silent comedy that Tati would become famous for nearly 20 years later with Mr. Hulot's Holiday.