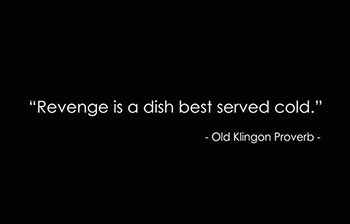 "Another trend I noticed while slowly working my way through the Masters of Bilge canon was that bad writers like to preface their books with a quote from somebody classy.....This made me wonder why great writers didn't start their books with quotations from world-class hacks."
— Joe Queenan in Red Lobster, White Trash, and the Blue Lagoon.
Advertisement:

(from the Greek epi-, "on" or "over", and gráphō, "writing", meaning "writing upon" or, more colloquially, "inscription") is the quotation of a line, excerpt or poetry done at the beginning or (more rarely) at the ending of a work, segment or chapter. Frequent in literature, shows up occasionally otherwise.

In written works, epigraphs are often used to make the reader look in a certain direction while reading, or as instructions on how to receive the work. In Speculative Fiction, it is often used to do an Encyclopedia Exposita. Can also be used for an As the Good Book Says... effect.