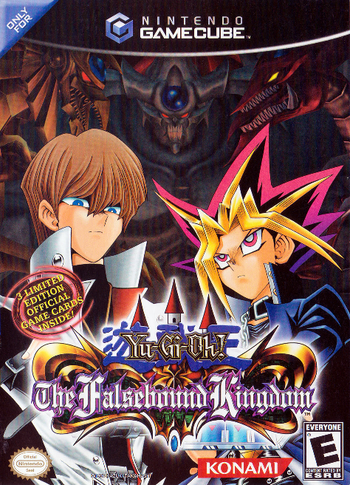 Yu-Gi-Oh! The Falsebound Kingdom is a Yu-Gi-Oh! video game for the Nintendo GameCube. Rather than a card game, it is a mixture of a Real-Time Strategy and RPG. The game is a sequel to Yu-Gi-Oh! Forbidden Memories and Yu-Gi-Oh! The Duelists of the Roses.

The story is split into campaigns for Yugi and Kaiba, with a campaign for Joey unlocked after beating both of those. It begins with the various characters from the series invited to a game company, SIC, to help test their new virtual reality RPG, "Kingdom", and ending up trapped in the game world.

Taking on the role of marshals in command of teams of monsters, Yugi and Kaiba, along with other members of the Yu-Gi-Oh cast, participate in the story of a rebellion against the Sygh-Varths Empire on the continent of Rondeval, with the hope that winning the game will allow them to leave. Along the way, Yugi and Kaiba will recruit into their forces not only other players trapped in the game, but also a few NPCs and a wide variety of monsters from the anime and card game.