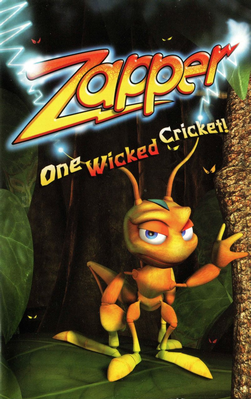 When squabbling siblings Zapper and Zipper end up breaking their TV's antenna in their struggle, elder Zapper has the wise idea of using his unfortunate younger brother as a makeshift signal receiver... and unwittingly ends up getting him abducted by thieving magpie Maggie in the process. Now Zapper must save the little grub from the clutches of the feathered criminal, but the journey ahead won't be an easy one...

Released in November 2002* in the US and Canada; March 2003 elsewhere, Zapper was developed by Blitz Games and published by Infogrames Interactive for PlayStation 2, Nintendo GameCube, Xbox and Microsoft Windows; a Game Boy Advance version developed by Atomic Planet Entertainment was also available.