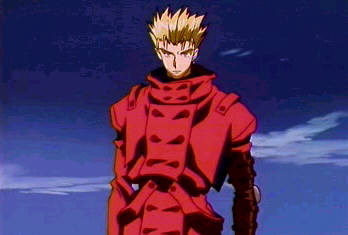 This is a basic way to show a character's determination. In a dangerous situation, rather than head for safety or rush madly into the fray, some will approach the problem with a measure of deliberation. Their expression, if not Dissonant Serenity, will be this: brow furrowed, eyes often narrowed, lips tight, body tense. The effect may be enhanced by a Kubrick Stare. The result is similar to a Death Glare, but less extreme, and usually not directed at a specific individual.

Often graces the face of the chronic Determinator. It may be used on a previously non-threatening character to indicate that they have become serious or just Took a Level in Badass.

Like many tropes, this one suffers an inverse relationship between prevalence and effectiveness. A character who sports this look all the time is likely to fall prey to The Worf Effect, whereas one who only wears it once or twice, especially near the climax, will be more effective.