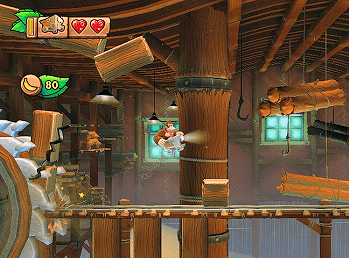 This is why we have to save the trees.
Advertisement:

Lumber mills are dangerous places, especially to the people who aren't supposed to be there. It doesn't matter if you're taking part in a massive firefight, running from the local slasher or just trying to navigate the place with your limbs intact. Nobody goes into a lumber yard expecting a safe haven if a better alternative is available.

Unfortunately, most times there isn't a better alternative, and with all those deadly power tools scattered about, lumber stacks waiting to collapse on someone, and enough saws to shred a small town, you can expect a high mortality rate whenever one of these places shows up.

To count as an example, a lumber mill or at least a lumber yard motif must be used. Characters don't have to die or suffer serious injury, but must be menaced or endangered by the lumber mill in some way. This trope sometimes involves a nasty-looking saw and some poor schmuck tied to a Conveyor Belt of Doom or power tools being used as improvised weapons during a fight or interrogation.

A staple of many old-timey Dastardly Whiplash cartoon villains.

Note that although "trouble at t' mill" is a cliché of dramas set Oop North, the mill in such cases is a textile mill, not a lumber mill, and the trouble is of a different kind.