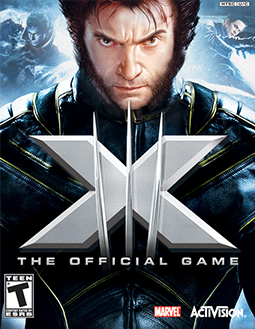 An 2006 movie-tie in game set in the X-Men Film Series between X2: X-Men United and X-Men: The Last Stand which the player controls Wolverine, Iceman and Nightcrawler. Still reeling from the aftermath of X2, the X-Men must deal with a number of threats ranging from random mutant terrorists to the emerging Sentinels - killer robots designed specifically to hunt down and kill those carrying the X-gene. The story was co-written by Chris Claremont and Zak Penn and is used to explain Nightcrawler's absence from the third movie.

There are three versions of this game for different consoles: the main one for the PlayStation2, Xbox and Xbox360 by Z-Axis and Beenox, a second one for the Game Boy Advance by WayForward and a third one for the Nintendo DS by Amaze Entertainment. Much of this trope entry follows the main version, unless if otherwise stated in the entry.

Retroactively, the events of this game were made non-canon.

X-Men: The Official Game includes examples of the following: