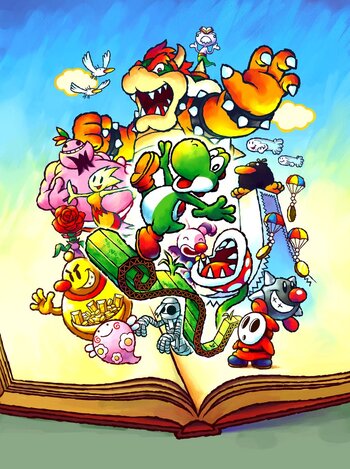 Yoshi's Universal Gravitation (released as Yoshi Topsy-Turvy in the USA) is a Puzzle Platformer in the Yoshi series, developed by Artoon and released in 2004 for the Game Boy Advance (2005 internationally).

Bowser has been rampaging across Yoshi's Island, sending the peaceful land into disarray. Fortunately, Hongo, the well-intentioned ruler of a spirit-filled tome known as the Forbidden Pop-Up Book, takes it upon himself to seal the evil Koopa King within the book's pages. Unfortunately, the entirety of Yoshi's Island is sealed along with him! It's up to Yoshi to defeat Bowser, hopefully convincing Hongo to release his homeland from inside the tome. And this time, he wields the power of gravity.

The game features six different worlds, or "tales" (eight if you count two boss-only worlds), each of which introduces a different spirit from the Forbidden Pop-Up Book. The levels follow a mission-based structure, in which, apart from completing the level, you must do it in the way the level's spirit host desires. Each spirit has their own particular theme and desires, and in later worlds, levels can be hosted by two spirits at once! If you satisfy the spirits, you will receive a Happiness Medal, a number of which are required to progress.

In the vein of Kirby Tilt 'n' Tumble or WarioWare: Twisted!, the gameplay hinges around a gyroscopic tilt sensor built into the game's cartridge. By tilting your Game Boy Advance around, you can help Yoshi advance through the various levels in multiple ways.