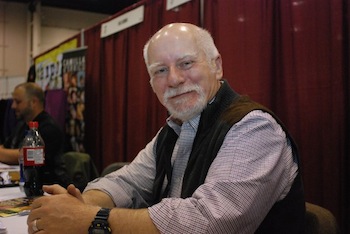 "So yeah, Chris is verbose, that's his style. And sometimes it works. Chris is the only writer I've ever worked with that managed to make me cry reading a page I had drawn. That was a page in Iron Fist. When I got to that page and read what he had written, I actually teared up. It was beautiful. So give the guy his props. Chris Claremont is the best Chris Claremont out there. No doubt about it."
— John Byrne pets the dog
Advertisement:

Christopher S. Claremont (born November 25, 1950) is a comic book writer, most famous for his work as the writer of X-Men from 1975 to 1991 (he took over the title at the age of 25), and a few shorter runs later. During his first tenure on the series, Uncanny X-Men developed from one of the least popular Marvel comics to one of its flagship titles, and spawned many spin-offs (such as New Mutants, X-Factor and Excalibur). His original 16-year run on Uncanny X-Men is one of the longest tenures by a single writer on any Big Two superhero comic, if not the longest, and it was him (along with people like Dave Cockrum and John Byrne) that turned them into the pop-cultural juggernaut they remain to this day.

Claremont was one of the first writers in the superhero genre who regularly made a point of incorporating strong female characters into his stories. In contrast to previous writers, these characters were rarely Token Girls, but frequently played central roles in major stories, and they were often the most powerful members of their teams. During his first tenure at Marvel, he created (or strongly influenced) many of the female characters who remain prominent in Marvel Comics today—including Storm, Jean Grey, Rachel Grey-Summers, Rogue, Misty Knight, Colleen Wing, Kitty Pryde, Carol Danvers, Jessica Drew, and the Empress Lilandra. He also codified Magneto as a morally complex Well-Intentioned Extremist, turned Wolverine from an obscure one-shot Hulk villain to a pop culture icon, and penned several epic tales that are still recognized as classics of the superhero genre today—in particular, The Dark Phoenix Saga, Days of Future Past and God Loves, Man Kills. This makes him one of the single most influential writers in comic book history (and through X-Men, to all of pop culture), to the point where four out of the nine current X-Men films are directly based on stories he wrote, and the other five (Logan possibly excepted) were all very heavily influenced by them.

After departing from Marvel in 1991, owing mostly to repeated clashes with the editorial department at the time, Claremont worked on several other projects. This includes a series of original novels (First Flight, Grounded!), contributions to George R. R. Martin's Wild Cards series, and co-writing Chronicles Of The Shadow War, a trilogy of novels set in the Willow universe, with George Lucas. He also wrote an original series for DC called Sovereign Seven that lasted 36 issues, as well as the graphic novel Star Trek: Debt of Honor.

He returned to Marvel in the late nineties, writing Fantastic Four and X-Treme X-Men with Salvador Larroca and Igor Kordey. He was later put on Exiles, which was later relaunched as New Exiles before being cancelled; the alternate-universe reboot X-Men Forever, which picked up with the characters where he'd left off with them in 1991; and Nightcrawler with Todd Nauck.

Since then, Claremont has occasionally returned to write at Marvel for the X-Men franchise, including the Black one-shot for Magneto, a story in the Wolverine anthology Exit Wounds, and an issue of the classic-creator-driven X-Men Legends.

You can spot a comic he's written instantly from the dialogue, known by some fans as "Claremontese."

Tropes this author is known for: