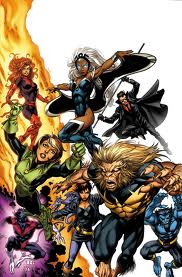 The first X-Men Forever series was a 2001 6 issue mini series written by Fabian Nicieza. In a similar vein to a previous similarly named story starring The Avengers, Avengers Forever, the series was a Time Travel story involving the grouping of Jean Grey, Iceman, Mystique, Toad, and the Juggernaut. It addressed classic X-Men themes while trying to fix some instances of Continuity Snarl and Plot Holes that were attached to certain characters and events over course of the X-Men history. This is not that.

The next volume of X-Men Forever (2009-2011) was a Marvel Comics title written by Chris Claremont set in an alternate reality similar in places to the 1990s era of the mainstream Marvel Universe. The title allowed Claremont to tell the story lines he had intended to tell within the pages of X-Men Vol. 2 before a dispute with Bob Harras forced him to depart Marvel for a brief period.

The title was intended to reflect the X-Men's journey through a more consequential and more grounded world, where characters not only die, but STAY dead, certain characters also go through new, even questionable, changes and never revert back to their status quo. Claremont insists that all changes are permanent. The series lasted only two years before being cancelled for low sales.

Examples of the Claremont series: