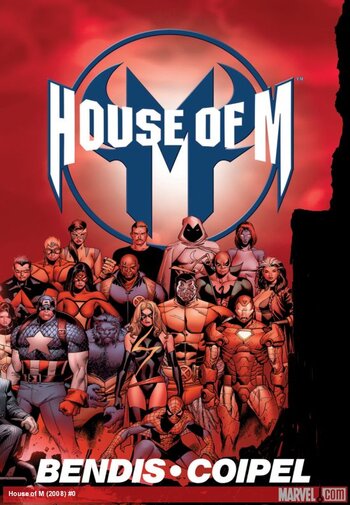 Most of us are wondering what we're doing here...
"No more mutants."
— Scarlet Witch
Advertisement:

A Marvel Comics Miniseries with several tie-in books following the events of Avengers Disassembled. It ran for 8 issues (August-December, 2005).

Wanda Maximoff, better known as the Scarlet Witch, suffers a reality-warping mental breakdown and is taken to Genosha by her father Magneto. When Wanda shows little sign of recovery, the X-Men and the Avengers meet to discuss what action should be taken next; they decide that Wanda must be killed. The combined teams arrive at Genosha when suddenly the world is swallowed by a bright white light...

The scene cuts to Wolverine as he wakes up in a world that has completely changed: A world where mutants are the dominant species, humans are now a persecuted minority, and the United States is led by the House of Magneto. The now-scattered and mind-altered Avengers and X-Men must try to reunite and find out how to reverse what happened on the day they arrived on Genosha. They later come across Layla Miller, a young girl who is aware that reality has been changed and who helps expose the truth about their "current" reality.

Turns out Wanda's twin brother Pietro (Quicksilver) convinced her to rewrite reality into one where all the heroes got to have their greatest desires — including Magneto's and Professor Xavier's — which meant that Magneto's family ruled the mutants and the mutants ruled the world, and Professor Xavier had died a meaningful death and mutants and humans live side-by-side (sort of). The Avengers and the X-Men confront Wanda after regaining their memories of the reality that existed before Wanda's Cosmic Retcon. Wanda suffers yet another nervous breakdown and eventually restores the original reality, but depowers 99.99% of the world's mutants as well. Afterwards, she disappears without a trace and the reader is given a clue that the depowering might not be as permanent as it seems.

The House of M storyline is continued in X-Men: Decimation. Some years later, Marvel released two mini-series, House of M: Avengers and House of M: Civil War, filling in a few details of this reality's backstory.

The Marvel Cinematic Universe series WandaVision takes some inspiration from this run, mainly the plot point of the Scarlet Witch using her reality-warping powers to change her surroundings to her liking after a traumatic event.

Tropes found in the comic: