Warning: This page contain unmarked spoilers for the Marvel Cinematic Universe. Read at your own risk. 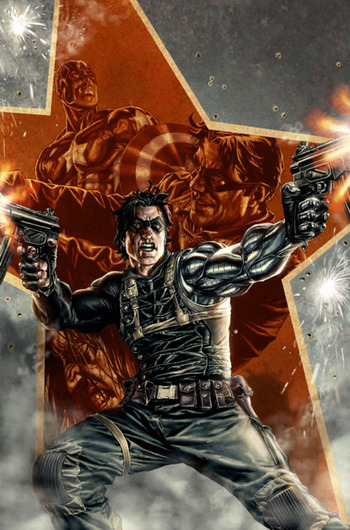 In 2004, Ed Brubaker started writing a new volume of Captain America, and the way the world saw Bucky was changed forever. While once viewed as a joke of a character, he was retconned to be a 17 year-old highly-trained commando assigned by the Army to be Captain America's sidekick to counter the Hitler Youth, but also to serve as a covert assassin, performing operations that Captain America himself could never be seen doing; what was initially believed to be his origin was simply a cover story cooked up by the Army press. Instead of dying due to the drone, he instead lost his left arm and a fair chunk of his memory. He survived submersion in the Atlantic Ocean only to be later picked up by a Russian submarine hoping to rescue Cap for the Allies. While he'd lost memories of his life experiences, he retained skills honed through instinct, including his combat training and several languages, and was thus molded into a Soviet assassin as sort of a sick joke by a humiliated Russian officer. As The Winter Soldier, he went on to become a legend of the Cold War, performing acts of terrorism and sabotage on US soil under Soviet orders.

Bucky eventually regained his memories, and has since spent his days trying to atone for his sins as the Winter Soldier; working for Nick Fury, and following Steve's death, serving as Captain America himself and as a member of The Avengers.