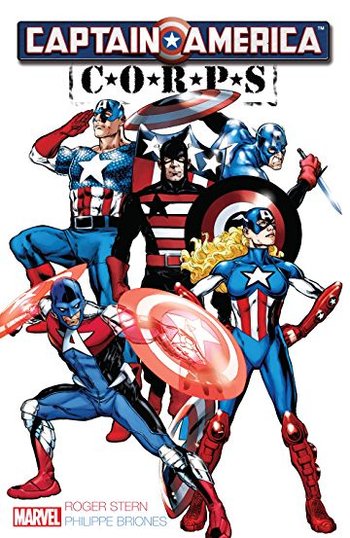 Captain America Corps is a five-issue Crisis Crossover miniseries (August-December, 2011) starring — who else? — but Captain America.

More specifically, it stars Bucky Barnes, alongside four other Captains America from the past and future— Steve Rogers, the original Cap, just before he made his debut; John Walker, the substitute Captain America who took up the name U.S.Agent after trading costumes with Steve; Shannon Carter, niece of Peggy and Sharon Carter and next generation's American Dream; and Kiyoshi Morales, Commander A of the 25th Century's United Americas.

Someone is going back through time and various dimensions and removing Steve Rogers' frozen body before he can be revived in the modern day. Tath Ki, an associate of Uatu the Watcher, has been watching it happen and finally intervenes by plucking the Caps from their various points in time and showing them what will happen without Steve to guide the Avengers. Instead, his place is taken by a pair of superheroes called Broad Stripe and Bright Star, two young women who eventually succeed in disbanding the Avengers and subsuming their role with the AmeriCommand, ruling America as a police state where unauthorized mask-wearing will get you chased through the streets for your trouble.

Seeing as how this is the Captain America Corps, the Captains rally the usual crowd of Marvel of heroes to systematically defeat the AmeriCommand and return the frozen Steves to their proper place in space-time.