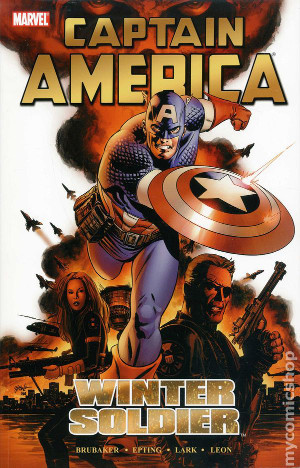 Captain America: Winter Soldier is a story arc in Marvel's Captain America comics. It was written by Ed Brubaker, and published in 2005 as the first part of Captain America's Volume 5 series, running from issues #1-9 and #11-14note  #10 is exempted from the storyline due to being an unrelated House of M tie-in .

While adjusting to life in 2000s New York City, Steve Rogers receives an astonishing call from S.H.I.E.L.D.: the Red Skull has been assassinated and whoever killed him has stolen the Cosmic Cube. With the help of Sharon Carter, Steve follows the Skull's posthumous tracks for his mass bombings across the world, while Nick Fury investigates their prime suspect, Alexander Lukin, the CEO of Kronas Corporation. What clues they find seem to indicate that Lukin now has control of a Reality Warping artifact, and of a Cold War legend known as the Winter Soldier...

The events of this arc were loosely adapted in the 2014 movie Captain America: The Winter Soldier. As a tie-in to the film, the comic was reprinted in a deluxe hardcover edition. Additionally, Brubaker himself made a cameo in the film.