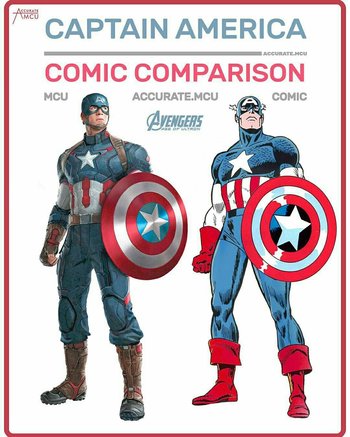 The Star-Spangled Man with a Plan
"The legacy of that shield is ... complicated."
— Sam Wilson, The Falcon and the Winter Soldier
Advertisement:

Captain America is a Marvel Comics superhero. Steve Rogers was a small, skinny young man who yearned to join the Army during World War II, but had always been rejected. Finally, he was given a chance with Operation: Rebirth, Dr. Abraham Erskine's attempt to create a Super Soldier formula. It worked on Steve, but a Nazi spy ended up killing Erskine and the formula was lost. After fighting in World War II with his sidekick Bucky Barnes, Captain America was accidentally frozen in the ice and revived in the modern day, where he joined The Avengers.

Captain America has appeared in:

And if you're wondering where Captain America's shield is now, let's just say you can catch it weeknights on CBS at eleven-thirty-five EST...