You Just Told Me 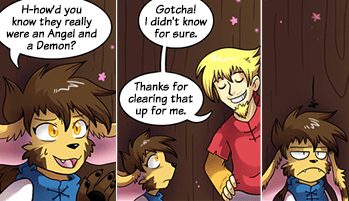 "Accuse a guy of having bad locks and before you know it, he's telling you where his motion detectors are."
— Burn Notice, "Breaking and Entering"
Advertisement:

Ben has a secret. Stan, typically a rival or enemy, indicates, in some fashion, that he knows it - either by stating so directly or by implying it with his words or actions. Ben reacts in a way that confirms Stan's suspicions - sometimes, though not always, by outright asking "how did you know?", in which case the answer, of course, is this trope's name.

The ploy used to force The Reveal can be an outright declaration that they know, a specific word/phrase, or (if the chracter is hiding their identity) a name or something spoken in the other character's native language. It can even be a non-verbal prompt, such as a familiar face, location, scent, etc. The point of the trope is that the mark is hiding something, and deceived tricks them into revealing it by acting as if he already knows the truth.

One of The Oldest Tricks in the Book.

Subtrope of Reflexive Response and Batman Gambit. See also Pull the Thread, Out-of-Character Alert, Bluffing the Murderer. If one deliberately commits a Critical Research Failure to goad another into correcting them when they otherwise wouldn't, see Correction Bait. If deceived wasn't suspicious until the infiltrator responded the way they did, it's Something Only They Would Say. If the deceived says something that only an impostor wouldn't be suspicious of, it's Bluff the Impostor. I Never Said It Was Poison may occur if the infiltrator mentions some facts about the case that deceived hadn't revealed. Suspiciously Specific Denial is totally not a related way of letting information slip. This also gives Ben a case of Implausible Deniability.

Not to be confused with "How Did You Know?" "I Didn't.", where someone appears to act on certain information that another person knows is secret, then reveals at the end that they didn't know it after all. The inverted trope is I Never Told You My Name, when the infiltrator's cover that's blown by revealing that they know too much about the deceived. Compare Freudian Slip, I'll Never Tell You What I'm Telling You! and Cold Reading. Sister trope to Thought They Knew Already.

Having previously deduced that one of the heroes' Chaos Emeralds is a decoy, Doctor Eggman tricks Tails into revealing which one is the fake with disastrous consequences.

Having previously deduced that one of the heroes' Chaos Emeralds is a decoy, Doctor Eggman tricks Tails into revealing which one is the fake with disastrous consequences.