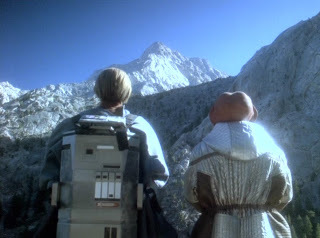 The start of the world's most spiteful mountain climb.
As Sisko looks on with mixed emotions, Jake packs his things in preparation of moving in with Nog, who is transferring to the station to complete his Starfleet training. Quark and Nog await the young cadet's arrival with a shipment of root beer, but Odo shows up instead. The constable smugly announces that he's there to arrest Quark to go to a trial. It seems the Ferengi's criminal schemes have finally caught up to him.
Advertisement:

Nog himself arrives on the station ready to get down to work. He assures Sisko that he'll keep Jake on the straight and narrow. Indeed, when the two old friends start living together, Nog's bossiness and Jake's laziness quickly start to grate on each other. Things aren't any friendlier on the runabout transporting Quark to his trial. Odo and Quark squabble incessantly as they prepare for a week-long trip. Through it all, Odo refuses to give any hint about what Quark is charged with. Bereft of conversation, Quark starts complaining about a buzzing noise and locates a bomb hidden in the runabout.

The bomb is a product of the Orion Syndicate, and it's a doozy. Constable and prisoner try beaming the bomb away, but it creates a limited explosion nonetheless, which severely damages the ship. They crashland onto an L-class planet, barely habitable. Upon waking up, they discover that they have no communications to send a distress call, limited rations, and no life support. They'll freeze or starve to death if they don't think of something. Quark eventually detaches the ship's transceiver array and plans to carry it high enough so that its weak signal can pierce the atmosphere. They'll have to reach the top of a nearby mountain.

Back on the station, Jake bristles at Nog's attempts to copy-edit his stories without his permission, while Nog rebukes Jake for lying around the apartment playing computerized dom-jot instead of cleaning or working. After a nasty argument, the pair decide to split up.

Odo and Quark make their laborious ascent. Quark has agreed to split the time they spend carrying the transceiver and wearing the one survival suit they have. Hours go by, and the exhausted pair realize that they have much farther to go than they originally realized. They don't help themselves by bickering the whole time. Quark accuses Odo of failing to take advantage of being a solid and enjoy the things he clearly wanted to experience while a Changeling. He also denies being a member of the Orion Syndicate, with his proof being that members always kill themselves before going to trial. He deduces that Odo doesn't know what charges, if any, he's been accused of. In fact, he's probably being summoned as a witness rather than a suspect. Odo counters that Quark could never afford to join the syndicate anyway, since he's a failure. The barkeep counters that that means Odo has spent his life failing to arrest a nobody, which makes him a bigger failure.

Stopping for camp, Quark passes out, and Odo panics, suspecting that he's dead, but the Ferengi wakes up half-deaf and barely clinging to life. They keep going but eventually degenerate into an even nastier argument. After spewing their hatred for each other, they get into as shoving match and tumble back down the mountainside. Odo's leg breaks, so Quark fashions a splint and a litter to drag the crippled constable with him. He only gets so far before collapsing and giving up. Odo refuses to die, however, and starts crawling past him, pushing the transceiver along. Shamed, Quark bitterly refuses to be shown up and continues his trek alone.

Back on the station, Sisko meets with Rom, and the two fathers share their disappointment that their boys are so stuck in their ways that they can't get along. Sisko visits Jake and announces that he'll need a roommate if he's to continue living in his own quarters, so he brings Nog back in. As Nog's captain and Jake's father, what he says goes, so the boys will just have to work it out. Jake offers to start exercising with Nog, but Nog suggests going out for some fun instead. With compromises in place, the friends share a laugh again.

On the planet, Odo realizes that Quark has been gone too long and so much have failed. He starts dictating his final message to whoever finds their bodies, but mid-sentence he's transported onto the Defiant. It seems Quark did make it all the way to the top and passed out over the transceiver. Odo is irritated that Quark has saved their lives. Bashir ushers them both into sick bay, where they recuperate side by side. Quark brings up all those horrible things he said about Odo and admits... he meant every single thing. Odo agrees. The two friendly nemeses share a chuckle.

Tropes Associated with this Episode