Webcomic / Scenes from a Multiverse 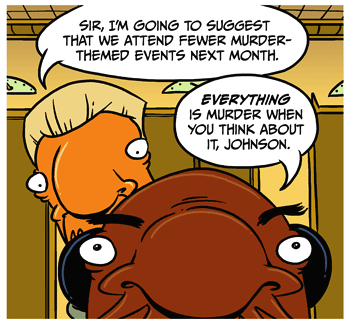 Two of the strip’s many, many colourful characters
Thief: I think the pizza wants me to murder?
Bryn: I do not understand the appeal of pizza.
Advertisement:

Scenes from a Multiverse is a gag-per-day webcomic written and drawn by Jon Rosenberg (creator of Goats) and updated every Monday-Wednesday-Friday. As the name would imply, it consists of random sketches taking place across a vast and varied (and seemingly infinite) collection of universes. Since the setting and the cast change every day, this comic technically has one of the largest and mind-bogglingly diverse casts of characters of any work. Although this means the work as a whole has no overarching plot, particularly popular locales and characters (most notably the “Dungeon Divers”) get revisited and develop their own storylines.

Content can be as wildly distinct as the locations themselves, ranging from sociopolitical commentary (this one

, or the blood-soaked antics of Cornelius Snarlington

, and you can read all comics from the beginning here

(Not to be confused with The Multiverse.)

Scenes from a Multiverse provides examples of: