Visual Novel / Otoboku - Maidens Are Falling For Me 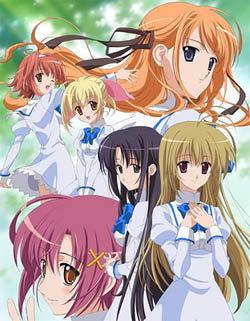 Which one is the boy again? note Mizuho is the one in the lower right corner.
Advertisement:

Otoboku - Maidens Are Falling For Me (also known as Otome Wa Boku Ni Koishiteru): Mizuho Miyanokouji is a nice guy from a rich family. When he hears that his grandfather left behind a request in his will, he's happy to oblige. Though he becomes a little less enthusiastic when he finds out that said request is for him to disguise himself as a girl and attend a specific private girls' school. Don't worry, it's all explained later...

Based on the girls love visual novel by Caramel Box, although it is more closely related to the Otokonoko Genre than the Yuri Genre.

Otoboku - Maidens Are Falling For Me provides examples of the following tropes: