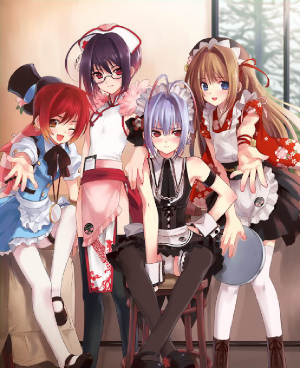 , it's a short story series (mostly text with a few illustrations) that was announced back in early April 2008 and once a week since then have been updating their site, introducing each of the four maids/brothers and prefacing the main story with a prologue. Has a general Slice of Life plot... WITH CROSSDRESSERS!

Has also received a short-lived manga adaptation based on the original stories written by Natsuki Hiroe and illustrated Chikage Mitsukura, and ran for 14 chapters.

It also spawned a web drama series, which can be accessed here

. Its main cast composes of:

An example of the Otokonoko Genre.

Compare Otoboku - Maidens Are Falling For Me.