Literature / An Outcast in Another World 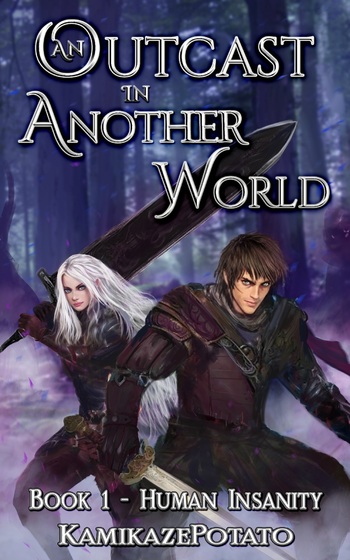 Can't be worse than a camping trip, right?
Good luck.
- A crumpled note found inside the main character’s pocket.
Advertisement:

An Outcast in Another World

, also known as An Outcast in Another World (Is "Insanity" a Racial Trait?) outside of Kindle, is a Web Serial Novel written by Kamikaze Potato.

It follows the adventures of Rob, a college sophomore who is dragged to another world against his will due to preventing the same fate from befalling his friend. Upon waking up in an off-colored forest, he quickly discovers that his body is now governed by stats and skills akin to an RPG. While this revelation causes no end of existential pondering, he has no choice but to embrace the crazy; Leveling Up and increasing his strength is his only chance at surviving to see tomorrow.

The world is extremely dangerous, filled with mutated animals, hostile locals, and poisonous berries. Rob’s early tribulations largely focus around getting his footing and trying not to die, which transitions into a struggle to find a place in a world that rejects him at every turn. It’s a good thing for him that he’s too stubborn to give up.

While the series is a LitRPG, it focuses primarily on characterization and plot progression over text dumps of stats and skills. Characters are given unique personalities and motivations and don’t exist solely as accessories to Rob’s adventure. There’s also a lot of mysteries surrounding the nature of the world, including the eerie infection causing mutations in the local fauna, that only seems to be getting worse as time passes...

Book 2 has been completed and can be read here.

An Outcast In Another World provides examples of: