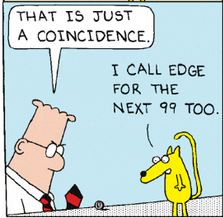 "Alright, that's it - I'm flipping a virtual coin to make my decision." *beat* "YAUGH! How does a virtual coin land on its side!?"
— Claptrap, Poker Night 2
Advertisement:

Put simply, a character flips a coin, which lands on its edge. This generally happens for one of three reasons: